Youville Centre > About us > Our History 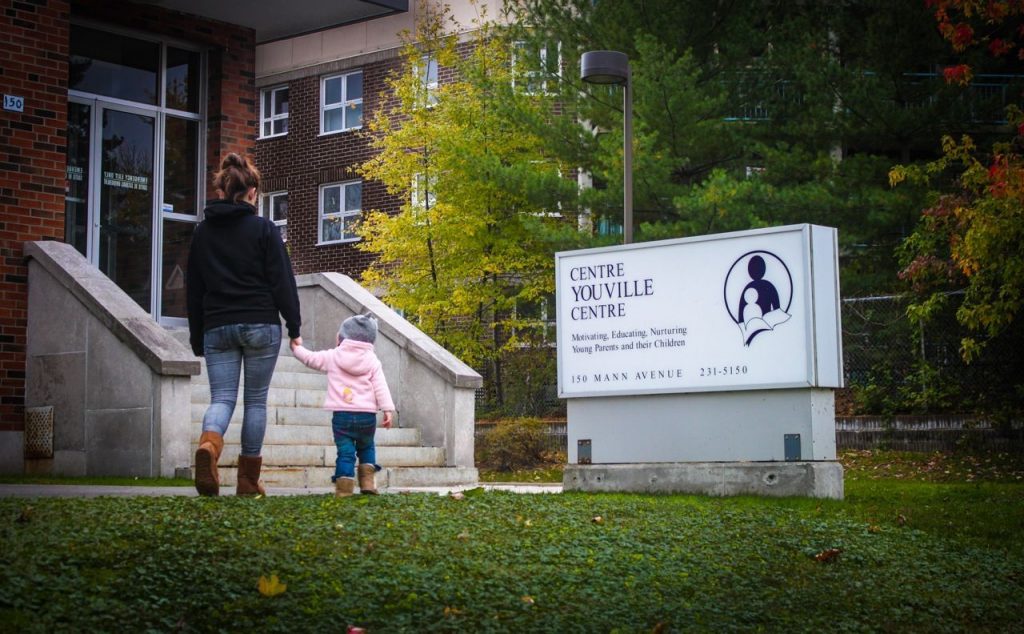 Incorporated and granted charitable status in 1985, Youville Centre was the brainchild of Sister Betty Ann Kinsella, a member of the Congregation of Grey Sisters and a former teacher at Immaculata High School and Our Lady’s High School in Pembroke. Sister Betty Ann’s vision was to create a centre that would give young mothers and their babies a chance for a brighter future through education, social support and parenting instruction. Named in honour of Sister Marie-Marguerite d’Youville, founder of the Sisters of Charity (now known as the Grey Sisters), Youville Centre continues to carry on Sister Marie-Marguerite’s legacy of helping those in need, particularly women and children.

What began as a small centre in Hintonburg serving 12 young mothers and their children now provides innovative programs and services for up to 100 young mothers and their children each year. At the outset, Youville Centre programming focused on providing young mothers with education, housing support, counselling, childcare and parenting instruction and it still addresses these needs today. During its Hintonburg years, the Centre’s programs and services, under Sister Betty Ann’s leadership, grew and developed. As Youville Centre grew, in addition to its emphasis on education and housing, important services such as legal aid, a public health nurse, parenting and life skills, nutrition, and enhanced crisis support counselling were added to its programming.

The Youville Centre is a founding member of the Young Parent Support Network which provides services to young parents in Ottawa.

In the Spring of 2000, Youville Centre moved to its current location on Mann Avenue. After a very successful Capital Campaign, spearheaded by Sister Betty Ann, important renovations were made to Youville’s current building in order to respond to the expanding population base of its clients and the evolving needs of the young mothers and their children. Many program changes have occurred over the past quarter century; however, the spirit of Youville Centre remains the same. Making a difference with two generations, breaking cycles and providing a hand up to young mothers still remains Youville Centre’s priority.

Sister Kinsella received the Order of Ontario in 2011.

On June 15th, 2018, heaven gained a beautiful soul, Sister Elizabeth (Betty) Ann, the founder of Youville Centre. As a dedication to her vision, tenacity, and generous spirit, we have shared her eulogy, as written by Sister Marguerite Somers, G.S.I.C.

“Sister Betty Ann was born to the Kinsella family almost 90 years ago, where she grew up and thrived with two brothers and three sisters in Lowertown, in Ottawa. She loved her family, her school friends, and was proud of her Irish Catholic heritage. As a family, the Kinsella’s weathered the depression of the 30’s and World War II, where her brother, Billy, was killed in action.

In 1947, Betty Ann came to the Grey Sisters community and took the name, Sister Mary Rachel. She was a woman of commitment who gave her best and called forth the best in others. The energy and strength of this woman were both shadow and gift. Betty Ann’s biography lists details of her active life. I would like to highlight the work which, I believe, was dearest to her heart ~ her work with young pregnant teens – Youville Centre. I remember well that in our day, teenage pregnancies were considered a tragedy and a family disgrace. Betty Ann saw a larger reality; yes, the pregnant teen and her family were in crisis; her education was interrupted; often she was unable to get a place to live, and she was unprepared to earn a living. The probable future for the teenage mother was to end up in the poverty cycle.

However, Sister Betty Ann determined that she would find a way to work with these girls and committed herself to supporting them until they could stand on their own. I found out all of this when Betty Ann took me to see what had been a vacant elementary Catholic school in Ottawa, formerly Holy Rosary. She described going to School Board officials and getting them to lease the empty school for $1.00/year. The four classrooms on the first floor were now two large classrooms, space was allotted for an infant daycare, and a kitchen was provided to feed lunch to both mothers and babies.

The second floor now had four bedrooms instead of classrooms; each with a changing table and a microwave. I saw the beautiful hand-made bedroom suite that her niece’s husband built in memory of his wife who had been killed by a drunken driver shortly after their marriage. I saw the other suites that local Catholic Women’s League groups had decorated and furnished. The mothers and babies shared a lounge and a laundry facility with two new washers and dryers.

I learned that Betty Ann had gone to the school board and asked them to provide specially trained teachers who could assess the unique level of each student’s academic achievement and potential, to design a curriculum specifically for her. Students accepted into this new program were committed to arrive on time for school, with homework done, and babies clean and fed. Some who lived outside of the Centre might have to take several buses to reach their destination. A cook and qualified childcare staff were hired. If a baby was fussy, the mother could go to them, comfort them, and return to their studies, worry free. That is how Youville Centre started!

More new mothers and mothers-in-waiting heard about the Centre and Betty Ann responded only as she could; a Board of Directors was formed to “find solutions for 14-18 year old mothers who were old enough to keep their babies, but too young to sign a lease.” The Centre was then called Youville Centre with a purpose to “motivate, educate, and nurture young mothers as they strove to become independent loving mothers and citizens.”

I was with Betty Ann when she attended her last Youville Centre graduation ceremony. The graduating mothers were on the stage in cap and gown as each name was called, a picture of her with her child or children was projected on a large screen. A group of teachers located in the auditorium paid tribute to each graduate in turn. They told of how each young woman had overcome obstacles, and what she had accomplished as she prepared for the next steps in her life, albeit college, university, vocational training, or employment. I learned that some of the children were now grown and were ready to receive scholarships of their own; some alumnae were even helping other young mothers and children in need. I saw for myself the gratitude and hugs these girls gave Betty Ann when they met her in person.

If you understand the simple definition of a prophet: One who sees a need and tries to heal it; then Sister Betty Ann was a prophet indeed.

For many years, Betty Ann suffered the debilitating effects of Parkinson’s disease. At Shalom, when she could no longer shuffle from the dining room to her room, even with the support of staff, she said to me, “If only they’d let me try!” She donated her brain to University research staff in the hope that it would lead to new insights to help future patients. Her niece said, “Isn’t that just like Betty Ann, thinking of others, even in death.”

Betty Ann was a Good News person. She showed Boards, Governments, business leaders, and individuals how to use their power and resources to make a difference in human lives. Betty Ann loved to gather people together to celebrate! Now it is time for us to celebrate Eucharist – to thank and glorify God for the whole of Betty Ann’s life.”

Heather
“She leaves behind a legacy of strong women and children, including the incredible staff who work tirelessly each day to provide these essential services.”
Susie
“Without a doubt, an incredible human; she for sure changed my life for the better. She believed in me when no one else did. She will forever be in my thoughts.”
Melissa
“Heartbreaking! I have so many wonderful memories of Sister Betty Ann. I loved this kind, caring, and helpful woman. It’s thanks to her empowering me, that I’m the strong, self sufficient woman that I am today.”
Kaarin
“Sister Betty Ann, you and your organization impacted my life and that of my children and grandchildren. You gave me a chance when I felt I had none. You provided me the opportunity to learn, grow, and love. I remain forever in your service and thank you for the strength you gave to me and so many young women like me. Rest in peace knowing the love and strength you gave so many, lives on in our hearts – Xoxo.”
Lynn
“Thank You Sister Betty Ann for all you have done during your full life journey. I first met you over 50 years ago as a student at the original Immaculata High School on Bronson, and then many years later during my professional career in the charity sector. You have inspired me on so many levels; may you now rest well and continue to inspire young mothers through the amazing legacy you have left in good hands with the current Youville team.”
Kathy
“Sister Betty Ann gave me an opportunity to achieve my goals when no one else did. She gave us hope when we felt hopeless. She housed us when we had no home. She loved us unconditionally no matter how much we pushed the boundaries. Today, I work for a law firm in Finance who has a couple of lawyers that were on the Board of Directors for Youville Centre. How amazing is that? Sister Betty Ann was one of a kind. Your love for us will never be forgotten. We are better people because of you. RIP… we got this!”
Amanda
“She was truly an inspiration and never took “no” as an answer which is why Youville exists and continues to make a difference in the lives of many young women.”
Penny
“She gave us everything – hope, self respect, pride and love. She was all that we needed and more. I’m so proud to have known and loved this wonderful woman.”
Sr. Maco
“What a great legacy! Grateful to have walked in her footsteps and continued her dream! May she rest in God’s eternal love.”
Angie
“It was back in 1994 that I attended Youville and had the pleasure of meeting Sister Betty Ann. I am so grateful to her and the Youville Centre for all that they helped me accomplish. They gave me the strength to believe in myself and lead me on a path to success.”
Cindy
“A great lady, and a powerful, compassionate advocate for young women and their children. Inspiration coupled with determination equates to a life well lived in service to others. You will be fondly remembered and missed.”
Leslie
“I will always remember her as a force to be reckoned with! She had more energy and drive than people half her age. She will be missed for sure; my deepest condolences to her friends and family.”
Tara
“This woman was a Saint. I had the privilege of knowing her when I attended Youville from 1996-1998. She was such a kind, loving soul and she did so much for teen moms making it possible for us to succeed. I’ll be forever thankful. May you rest in peace.”